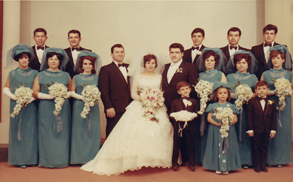 Joseph Salerno was born in Castrolibero, Cosenza, in the region of Calabria, Italy. The family’s two room home was a gathering place for family and friends to enjoy the traditional flavors of Calabria. His passion for cooking dates back to his childhood years where he remembers preparing pizza in the brick oven found in the rear of the house.

In 1957, parents Rosario and Francesca Salerno brought their family to America in hopes of starting a new and improved life for their family. They arrived at Ellis Island by boat and finally settled here in Chicago.

Brothers Vincenzo, Arnaldo and Joseph opened the Berwyn Tavern in 1966 on the corner of 16th Street and Wesley, in Berwyn. It later became known as Salerno’s Restaurant on 16th Street. The brothers began to dabble with their pizza recipe from back home and served their thick-crust pizza to the clientele. It was the customers who encouraged the Salerno brothers to expand their business and focus on serving homemade Southern-Italian favorites. While their wives prepared homemade pastas, sauces, meatballs and sausage, the pizza became famous.

Salerno’s Restaurant prides itself on quality Italian dishes made with the freshest ingredients. We guarantee our customers will enjoy their dining experience in our family-operated restaurants, and never go home hungry.

The Salerno family tradition continues to thrive, as the second generation follows in the footsteps’ of their fathers opening five locations in River Grove, Libertyville, Hodgkins, Lisle and Gilbert, Arizona.

Thanks to our customers Salerno’s Restaurant has been in business for fifty years. You have made us famous and put us on the map.